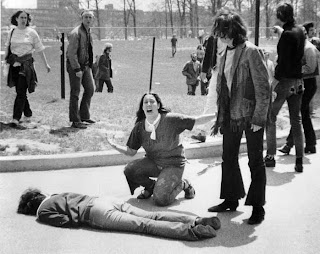 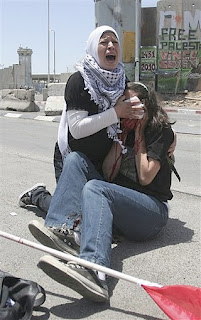 Left: the aftermath of shootings of demonstrators by the National Guard at Kent State University in the Vietnam era. Right: a peaceful American demonstrator (an artist, in fact) blinded by a tear gas canister shot by Israeli forces at a roadblock in Palestine.
Posted by Grumpy Old Man at 10:34 53 comments:

You odious prick, how's your attempt to smear Goldstone workin' out for ya, now that this has come out again?
Posted by Grumpy Old Man at 05:56 8 comments:

Books By My Bed 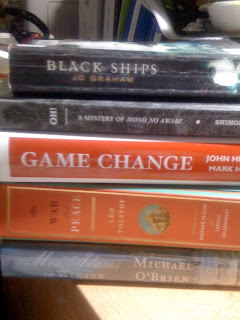 There’s a meme going around asking people to name ten books that have been influential in their lives, or views. You’re not supposed to think too much about it. Well, here are mine, with brief explanations. I left a great deal out, for example the works of Érico Veríssimo, which taught me a great deal about Brazil, or Mary Renault, whose early historical novels I liked so much.

If I did it tomorrow, I'd come up with a different list, maybe starting with Apuleius's Golden Ass, the Lazarillo de Tormes, and A Confederacy. There are no right answers.

1. Homage to Catalonia, by George Orwell.

Orwell, like many leftists of his time, went to Spain to fight in the Civil War. In Orwell’s case, he didn’t leave his common sense or keen observer’s eye behind, and was able to see and convey the darkness behind many leftist movements, especially the Stalinist version of communism. At an early age, I acquired a skepticism (not strong enough) about the left.

2. The Road to Serfdom, by Friedrich A.Hayek

A popular book on the follies of socialism and the managerial state, that lays out pretty clearly how government control of the economy doesn’t work very well, and tends to tyranny. I’m not a down-the-line libertarian, but this is an important book.

A concise and literate overview of the Orthodox Christian tradition.

4. All the King’s Men, by Robert Penn Warren

A fine book about a special, but not entirely atypical corner of American public life. Evokes the great but flawed Huey P. Long of Louisiana. See also Liebling's The Earl of Louisiana, an account of Huey's brother, crazy, though perhaps like a fox.

5. 100 Poems from the Chinese, by Kenneth Rexroth

6. The Death and Life of Great American Cities, by Jane Jacobs

7. A Wizard of Earthsea, by Ursula LeGuin

LeGuin is the daughter of the Berkeley anthropologist Alfred Kroeber, but instead of researching existing worlds, she creates fascinating worlds of her own. Earthsea is perhaps the best known. This is the first novel of the trilogy--or is it now a tetralogy. A coming-of-age novel in a well-imagined different world.

Gamow wrote more than one popularization of the cosmology known in my youth. It’s all changed, of course, but it drew me into an appreciation of science and mathematics, even if I never became proficient in either.

Paul Goodman’s dissection of the early meritocracy, and dream of a better way of growing up, and being grown up.

A wise and humane account of the pressures on many pre-adolescent and adolescent girls, and how to help them to grow up strong, with the liveliness they had at 10 and 11.
Posted by Grumpy Old Man at 03:52 14 comments:

Wm. Safire having bought the farm, someone had to make New Year's predictions. Here are mine, in three variants: quasi-apocalyptic, benign, and realistic. Or: really bad s**t, pretty good news, what's most likely to happen.  We'll check in a year. Here goes:

9. Earthquake and tsunami during monsoon season destroy most of Bangladesh, killing millions.

1. Health care negotiations stall. Democrats ultimately pass a bill that everyone hates, creating new entitlement. The entire camel is in the tent.

I came up with four more:

1. The rise of new economic powers in the former Third World: China, India, Brazil. This change is as permanent as things get in history.

Let's hope it doesn't end in war, as did the rise of Germany.

2. The digital media explosion, with the decline of the MSM. We're just in the middle of this transition, but it's enormously significant in ways we're just beginning to understand.

3. Environmental degradation. I'm a bit skeptical on global warming, though on balance it seems to be happening, but the damage done to oceans, groundwater, forests, and arable land is undeniable.

4. The decline of fertility. Most marked in Europe and Japan, but occurring almost everywhere. Concomitantly, third world immigration to industrial countries. The trend lines may shift, making straight extrapolation disaster scenarios uncertain, but this is another change that is incomplete and whose results are uncertain.
Posted by Grumpy Old Man at 09:57 1 comment:

If Your Christmas Gets Too Saccharine, Watch This

One of the few songs I know about disillusionment (as opposed simply to torch songs).

There's no redemption for us without recognizing our fallenness.
Posted by Grumpy Old Man at 13:27 No comments:

The Return of the Player

The Return of the Player by Michael Tolkin


My rating: 3 of 5 stars
This book is a send up of the Hollywood and associated New Rich. There are some very funny insights and scenes, but the book is not nearly so profound as the author thinks. His views, alas, are often quite tiresome.

The Ochlophobist is a Memphis blogger. He has posted a screed on Thanksgiving that is well worth reading and pondering. The latter part of the post is a good story about bullying and other antics at a Mennonite school. Well worth reading but hardly food for debate.

The former part questions Thanksgiving, among other things because it is surrounded by patrioteering mythology. Our kindergarteners dress as Pilgrims and Indians, and are told about the harmonious beginnings of our country, but not about the massacres that followed not so long after, which were also the occasion of Thanksgiving by the Puritan community. A long history followed, in which our forbears were far from blameless.

Och sees Thanksgiving as an idolatrous feast, in which we gorge ourselves on packaged foods, and celebrate our nation as if it were a god, rather than a flawed set of human institutions. Och is not a zealot, and celebrates with his family, but uncomfortably.

Och, as usual, is onto something. In our sometimes frantic efforts to weld a bunch of immigrants and their descendants, from many different ethnies and religions, into a nation, we tend to become loud, assertive, and if challenged, defensive. Perhaps we have no need constantly to beat our breasts about the crimes of our predecessors, but neither should we be oblivious to them. The ideology of American exceptionalism is indeed idolatrous, and has provided some of the rationale for foreign misadventures from the Phillipines to Iraq. We can love our country without bowing down to it as a god or fashioning a mythology to deify it.

Thanksgiving is part of a festival cycle that has grown up. We can say that it is as follows:

American readers will be familiar with the rituals and symbols involved, and because analysis could get tedious, let's leave it at that. This cycle is no longer recognizably Christian, as its personifications (Witches, ghosts, and goblins; turkeys, Pilgrims, and Indians; Santa, Rudolph, Jimmy Stewart and Bob Cratchit; the Old Man and the Baby New Year) show. For some Christians, the Holy Family and the crêche play a minor part, but if one listens to the music in public places, it's "Rockin' Around the Christmas Tree" and "Chestnuts Roasting Round An Open Fire," not "Come All Ye Faithful" or "Angels We Have Heard On High." The religious expressions are frequently treated as private and if expressed in the public square, offensive.

I am not raising the spectre of the "War Against Christmas," which by now is a straw man. If there was such a war, the Christians have long since surrendered.

Like a freeway gawker looking at a crash, or a spectator at a bum-fight, I am drawn to Commentary Magazine's contentions blog, to see how degenerate neoconservatism and hasbara can become. Max Boot, usually one of the site's less-deranged bloggers, posting about the importance of Dubai, despite its financial troubles, today blew my weak mind:

But still for all of Dubai’s excesses it is a wonder that it has gotten this far. It deserves not ill-disguised glee at its misfortunes but a degree of respect for its willingness to flout traditional Arab taboos. It is, for example, a place where Emiratis in white robes rub shoulders with Russian hookers in mini-skirts — a place where it’s perfectly possible to get a nice cocktail (and not a “mocktail,” as in Kuwait) in a public bar, and to do so in the middle of Ramadan if you’re feeling parched at that point.

If an Islamist needed an example of not merely the West, but Western Jews, promoting the destruction of traditional culture in the Middle East, Boot has provided it.

I do not romanticize Islamic culture. There is, no doubt, plenty of sexual hanky-panky in Islamic societies, as there is in almost all. If, however, the test of an enlightened society is the presence of Russian whores and the availability of martinis in public places, the game of spreading modernity by force of arms or by largesse financed through the sale of paper to the Chinese is not worth the candle. Let them import their own damned whores.
Posted by Grumpy Old Man at 14:03 2 comments:

As Netanyahu knows, there is consensus support among Israelis for his plan to ensure that the country retains defensible borders in perpetuity. This involves establishing permanent Israeli control over the Jordan Valley and the large Jewish population blocs in Judea and Samaria. In light of the well-recognized failure of the two-state solution, Hamas's takeover of Gaza and the disintegration of Fatah accompanied by the shattering of the myth of Fatah moderation,Israel should strike out on a new course and work toward the integration of Judea and Samaria, including its Palestinian population, into Israeli society. In the first instance, this will require the implementation of Israeli law in the Jordan Valley and the large settlement blocs.

Seems like the ogress has embraced the one-state solution, albeit without the right of return, and she'd like to finesse letting all the Palestinians on the West Bank vote right away. Would she also let them travel and work throughout the country, on the same roads, dismantle the roadblocks, etc.?

I still fear the real plan is to provoke a war and carry out "transfer" (expulsion) under cover of the crisis, but perhaps she's serious.

In any case, Oslo is just about over, and apartheid will not stand.
Posted by Grumpy Old Man at 12:26 No comments:

The Sergeant Nails It: "Amazing Grace" at the Ft. Hood Memorial