We Hang By a Thread 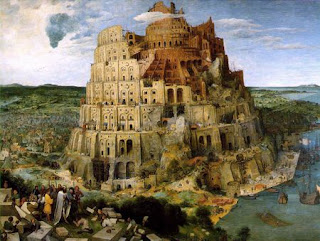 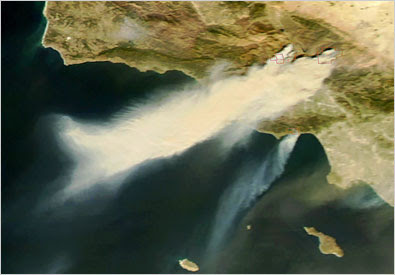 Although we ourselves have been mercifully spared this time, Southern California is burning, and thousands have fled.

These events are in part the playing out of the ecosystems of this region, which are in the main fire-based. Some of the most common plants require fire to germinate. People have made it worse by settling in the midst of this ecosystem and then suppressing the naturally occurring periodic fires, which then become more devastating when they finally occur.

We also may be at the start of a secular drought cycle in the entire Southwest, the kind that may have erased cultures in the past. Or not.

Meanwhile, though General (Yes Ma'am) Sherman is long dead, Atlanta has blithely ignored the drying of the lake upon which its water supply depends, and has less than 3 months' supply and no backup. We have seen in New Orleans that our vaunted civilization is still vulnerable to the vagaries of nature. The builders of Babel were confounded in their pride. Why not us?

We have given in to gluttony, pride and greed, and have chosen to be ruled by mental and moral Pygmies ("You're doing a heckuva job, Brownie.") Why not a reckoning? Lord, have mercy.
Posted by Grumpy Old Man at 09:26 4 comments:

The Sad Truth About the DC Public Schools

A parent, who in the latter part of the article discloses his race, explains why he sold his home and moved to Virginia.

It's a sad and revealing article, among other things because the effects of immigration play a prominent part in the story.

The teachers' union line that the problem is money won't wash--DC expenditures per pupil are the highest in the country. And if there's a black majority city in the U.S. that's decently run, tell me where it is. I can think of one.
Posted by Grumpy Old Man at 08:37 No comments:

We Need to Import Monkeys From India

The deputy mayor of the Indian capital Delhi has died a day after being attacked by a horde of wild monkeys.

SS Bajwa suffered serious head injuries when he fell from the first-floor terrace of his home on Saturday morning trying to fight off the monkeys.

The city has long struggled to counter its plague of monkeys, which invade government complexes and temples, snatch food and scare passers-by.

The High Court demanded the city find an answer to the problem last year.

HT: Truthdig.
Posted by Grumpy Old Man at 03:02 No comments:

I'm old enough not to care whether people think I'm a crank. Truth be told, I'm even a bit proud of it.

Yes, Dr. Paul makes more sense than the rest of those guys.
Posted by Grumpy Old Man at 19:43 No comments:

I Couldn't Help It

“Not every child is getting the guidance needed to keep them safe,” said Richard Veilleux, who said his child attends King Middle School. “This is about giving kids who are sexually active the tools that they need.”

The Portland, Maine school board has voted to give middle schoolers access to birth control without parental consent. Presumably, if they are sexually active, tools are the one thing they don't need.
Posted by Grumpy Old Man at 01:22 2 comments: 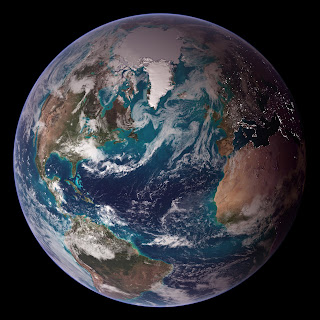 From NASA's wonderful earth observatory. You can subscribe to it here, for free.

I could launch into a litany of NASA's errors and boondoggles, but this stuff is fascinating. Your tax dollars at work, doing amazing things.

Note the city lights from Europe and the Mediterranean, the Arctic ice, the different colors of the water, the dark shade of the Amazon, and the light color of the Sahara.
Posted by Grumpy Old Man at 05:55 No comments:

Hitchens and the Bereaved 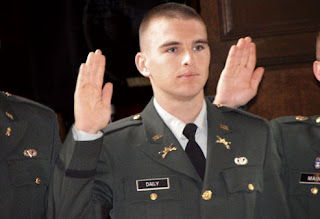 I've concluded that Christopher Hitchens (and I) were wrong about the wisdom of the Iraq war, overestimating the competence and wisdom of our leaders and the merits of exporting our institutions to such a different place.

Mark Daily, an apparently quite admirable young man, volunteered to fight in part because he read Hitchens and was persuaded by what he read. He was killed in Iraq.

Now Hitchens has come to know the family, and writes about the experience. An interesting read. Here's a "fair use" portion of the end:

As one who used to advocate strongly for the liberation of Iraq (perhaps more strongly than I knew), I have grown coarsened and sickened by the degeneration of the struggle: by the sordid news of corruption and brutality (Mark Daily told his father how dismayed he was by the failure of leadership at Abu Ghraib) and by the paltry politicians in Washington and Baghdad who squabble for precedence while lifeblood is spent and spilled by young people whose boots they are not fit to clean. It upsets and angers me more than I can safely say, when I reread Mark's letters and poems and see that—as of course he would—he was magically able to find the noble element in all this, and take more comfort and inspiration from a few plain sentences uttered by a Kurdish man than from all the vapid speeches ever given. Orwell had the same experience when encountering a young volunteer in Barcelona, and realizing with a mixture of sadness and shock that for this kid all the tired old slogans about liberty and justice were actually real. He cursed his own cynicism and disillusionment when he wrote:

For the fly-blown words that make me spew
Still in his ears were holy,
And he was born knowing what I had learned
Out of books and slowly.

However, after a few more verses about the lying and cruelty and stupidity that accompany war, he was still able to do justice to the young man:

But the thing I saw in your face
No power can disinherit:
No bomb that ever burst
Shatters the crystal spirit.

May it be so, then, and may death be not proud to have taken Mark Daily, whom I never knew but whom you now know, and—I hope—miss.

Quite sub specie aeternatis for a professed atheist.
Posted by Grumpy Old Man at 05:43 No comments:

I Feel the Earth Move Under My Feet

Yet another housing complex in South Orange County is slipping and sliding.

The OC Register reports that the earth is moving under the Laguna Summit development, and 48 families have had to leave their homes.

It seems the Mediterranean climate and the relative lack of crime and other urban unpleasantness in Orange County has fueled a decades-long housing boom. Unfortunately, the flatter parts of the county are built up, and developers have been leveling hillsides and creating artificial slopes for a long time, not always with care.

The weak and unstable soil types contribute to frequent landslides and other kinds of movement. I can't complain, I suppose, having made some money suing those responsible. When you have one-party government in the pocket of those who build, this sort of thing is inevitable.
Posted by Grumpy Old Man at 05:37 1 comment:

Apparently Dr. Dobson has threatened to support a third party candidate if Rudy Giuliani gets the nod. Apparently this twice-divorced, cross-dressing pro-choicer is too much for him, although I suspect it's the New Yorker in the guy that gets to him. After all, Mitt Romney is a Mormon and therefore an Arian, and manages to be both a political chameleon and an automaton.

Joe Carter agrees with the good doctor and goes through a game theory riff to say he'd never vote for Rudy.

The Anchoress reprises the story of the Pharisee and the publican to suggest that the likes of Dobson and Carter are arrogant and self-congratulating.

I think Carter and Dobson are being a bit self-congratulatory on their virtue, and yet--in politics, there's no compulsion to vote for someone you disagree with or even dislike.

I happen to like Rudy's style and recognize that on social issues, the President isn't very important. His judicial appointments are the main thing, and I don't think Rudy will be worse on that score than any of the others. What I fear is that Rudy will be an international adventurist. Appointing the warmonger Norman Podhoretz as a foreign policy adviser is not a good omen.
Posted by Grumpy Old Man at 05:17 No comments: