Silly me. I thought the Presidential campaign would be dull. It's depressing (as Mr. Roach says, like watching the Iran-Iraq war), but has had quite a few twists and turns more than faintly amusing.

I watched the debate last night. Both BHO and Hillary lost. The questions were terrible. Here are 10 questions I'd like to ask. I don't think any of them was.

1. Should we secure the Mexican border, whatever your views on legalization? If so, how? If not, why not?

2. Never mind mimosas with Weathermen–will you sell cluster bombs to Olmert? Will you outlaw torture, period?

3. What is NATO good for these days? Why not dissolve it?. What overseas military deployments (other than Iraq) will you reconsider, if any, and why?

4. Do you support any efforts at greater degree of energy independence? Aside from “green job” pipedreams, how would you achieve it?

5. Some young people are unsuited for college, and college for them? Can we do anything to train them so they can support themselves and their children?

6. Are you for trade restriction in any form, or for more negotiated trade deals? Or do you prefer to have it both ways?

7. Were (a) bank deregulation; and (b) bankruptcy “reform” mistakes? Should they be corrected?

8. Don’t you think the “war on drugs” is stuff and nonsense? Should we have done with it? Are there too many people in prison? What should we do about it?

9. What corporate welfare would you cut, if any?

10. Can you propose any federal policies to promote heterosexual marriage and two-parent families?

Not holding breath.
Posted by Grumpy Old Man at 09:12 3 comments: 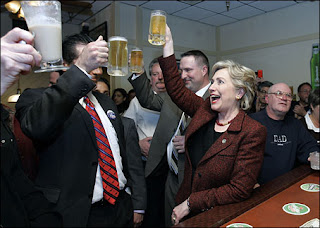 Hillary Clinton did not profit by their example.

A Link You Can Use

There's a board game, too.

Michael Barone is one of the most astute political analysts around. For one thing, he meticulously studies data, such as demographics and voting patterns.

Here he shows that on the whole, Hillary Clinton does well among what Barone calls "Jacksonians," basically the people that never watch PBS and work at real jobs if they are employed. Many of them are Scotch-Irish--that's a whole nother discussion. Obama does well among blacks, of course, but also among "Academics," either folks who actually are affiliated with universities, or people who graduated from one or are employed by the government. The pattern is pretty consistent, except for a few places, such as the Wisconsin primary.

The Jacksonian candidates have usually won the Democratic nomination, and when they didn't, the candidate got clobbered (Adlai Stevenson, George McGovern). This year, it looks like the Academic candidate, Obama, may win, aided by his near-unanimous support among blacks.

This analysis does not portend well for Obama in a race with McCain, who is Scotch-Irish by descent, and can cut into the Dems' vote. Of course, Obama has the war (depending partly on how it goes) and the economy to help him.

One partial answer to Obama's dilemma--Jim Webb for VP. He may be a stiff, but the Jacksonians are his people.
Posted by Grumpy Old Man at 06:42 1 comment: